So it's the first day on site, new job building a new office for the department of redundant overwork. Look it's a job right.

Anyway, as it's government work I have to use officially approved tools. None of this bring my own, nope everything will be supplied. Fine, whatever, money is money.

Job one, nailing up a bunch of plasterboard. So I'm hoping I'll get a nail gun but I am expecting a bit of manual labour. What I am not expecting is...

"What the hell is this?"

"Spanner. Don't you know what a spanner is?"

"Of course I know what a bloody spanner is! But I'm doing nails."

"And? How is that going to help me do nails?"

At this point the foreman takes his spanner and proceeds to batter a nail into the wall with it, slowly while hitting the wall a couple of times. I stand there dumbfounded.

"How can a hammer NOT WORK?" my voice is starting to get a bit loud now.

"Well before we started work I tested all the tools. And try as I might I couldn't tighten any nuts with the hammer. So I decided the spanner was more useful. I didn't want any confusion so we're standardising on spanners."

Well it's a living I suppose. Pass me the spanner, I need to paint a fence.

I was very angry last night reading another of the standard set of stories for "Why torture isn't that bad and can work". You know the one right? No? Ok here's you basic one.

You have a nasty nasty terroist man in custody, he's probably swarthy and bearded. He's planted a bomb in the city and he's mocking you with the knowledge that it'll explode soon.

Well of course you have to torture him to get the information before the bomb goes of. That's just obvious. Isn't it?

Ok. Now you've got a swarthy bearded guy in a room and he's not talking. You have credible information that he has knowledge of the location of a bomb in the city and you need it.

Guess it's time for the fingernail pliers again.

Whoop, there's another bomb, apparently, the information is legitimate. All the swarthy bearded men have long since been evicted but you are pretty sure this angry white boy knows something. He won't talk though, keeps asking for a lawyer. No time for that though... Bomb rememeber? Eventually he tells you a location but there's nothing there, his accomplises must have moved it. Eventually he names names.

One of the reasons I abandoned my faith was because I learnt the history of the Catholic Church (and the the others). It's not the only reason but it's up there. The church used torture to extract "confessions" for witchcraft from hundreds of women. Because if you're in enough pain, if you're broken and beaten and you know that all you need to do to get the pain to go is confess eventually you will.

Eventually everyone cracks under torture, but that doesn't mean it works, because cracking just means you start telling the people what you think they want to hear. The you consort with the devil and cast spells and curses. The you know where the bomb is. Any confabulation to make the pain go away.

But not just that. That's just the icing on the cake really. The fact that yes, if you put someone through enough pain they will break down and babble secrets to get you to stop.

I truly belive we have one life on this world, that our only impact is in the changes we can make on it. To make it better or worse, to move us towards a world where we all have a chance to excel or one where stupid evil bastards rule over ignorant peasants... again. I know which world I want and that world doesn't torture people.

You'd think that belivers in a loving god wouldn't torture people. But... the mental logistics they went through to do it were impressive. Because this is the thing, if you want to do something horrible you'll convince yourself it's good. That you're saving them.

We live in dark times. I hope we live through them.

Happy new year. I obviously didn't make a resolution to blog more this year what with it being the twelfth and this is my first post of the year. Such is life. Anyway lets see what's been going on.

I played some magic last night, first games fo the new year. Picked 6 decks from the Commander Project at random to take to the pub and then a final random selection gave me Vorel. If there's something that deck is good at it's making big dumb monsters. Lots of them. Winning... not as much. Oh well. I'm holding off on building any new decks this month as I need to get more sleeves and deck boxes and it's the post holiday money drought.

Also I'm currently working on Trevallis knocking up a GURPS Dungeon Fantasy sandbox that I hope to run over Roll 20. Expect more there soon. Assuming anyone is reading this.

That's always my biggest problem with creating anything, the deep dark yawning pit that asks "What's the point?".... Sigh. 40+ years on this planet and I still don't believe in myself. So that's one thing that I might change, I might start writing my thoughts here. I used to, when I first started writing a blog I wrote all about my life and my feelings and stuff. And then my ex wife got angry at my for sharing that our relationship wasn't super perfect with the world. So I started hiding, again.

Anyway, the rambling shall stop for now. At lunchtime I aim to explain wo the last two PC playable races fit into the Trevallis setting. So that'll be cool. 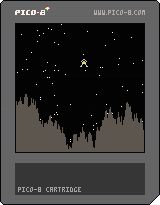 So a while back I was told aoubt Pico-8 a "fantasy console" for making simple games with. As a Xmas present to myself I thought I'd get it and have a play about. One of the things I like about it is the constraints you have to work in mean you have to scale down your plans. Currently I'm working on making a Lunar Lander game. When it's slightly more workable I'll export the HTML version and you'll be able to play it. But until then the image here is a fully downloadable and playable copy of the game (if you have Pico-8), feel free to gasp at it's almosy uselessness.

It's got twinkly stars though, and some quite scary ground. Next up making the ground have a few landing spots. Then gravity. It's fun. And programming for fun is something I get to do so rarely these days as people prefer me to programme for money. Sigh. Pesky money.

So last night my darling step daughter was singing Let it Go as the younglings are wont to do. And I had an epihpany, I'll go over the lyrics here and explain.

The snow glows white on the mountain tonight

Not a footprint to be seen.

Ok.. So she's on a mountain alone.

A kingdom of isolation,

All alone, everyone has deserted her I wonder why?

The wind is howling like this swirling storm inside

The wind? Swirling storm inside... What did she eat? Is this why she's alone. The mountain is a metaphor for everyone fleeing the noxious fumes she's emitting?

Couldn't keep it in;

There you go. She tried to keep it in but couldn't.

Don't let them in,

Be the good girl you always have to be

Because we all know good girls don't fart. Damm the patriarchy.

The sheer intestinal pressure building up.

Can't hold it back anymore

So at this point it's basially obivous. The poor girl has been holding back her wind for so long and now she just no longer cares.

Turn away and slam the door

Oh... see this is the problem. Her friends all desert her rather than accepting a normal fact of human biology.

what they're going to say

Let the storm rage on.

The cold never bothered me anyway

I'm guessing here cold is a metaphor for smell. Or possibly the cold of being alone in a cloud of toxic fumes.

It's funny how some distance

Of course everyone seems small, they are standing a long long way away.

And the fears that once controlled me

Can't get to me at all

See it's freeing to break free of the constricting roles society forces on you. Once you accept that and fart whenever you feel the need all is good.

It's time to see what I can do

Ok now this starts to take a dark turn.

To test the limits and break through

No right, no wrong, no rules for me,

To poop your pants. Don't force it.

I am one with the wind and sky

The clouds of gas are too thick to see anything?

Let the storm rage on

She's standing, everyone else has fled the building

My power flurries through the air into the ground

My soul is spiraling in frozen fractals all around

I'm never going back, the past is in the past

So at this point she's seriously lost it. I think maybe the fumes are making her a bit trippy. Fractals?

Again with the flying metaphor. That's some pressure she's managed to build up. Important note here kids, if you find yourself lifting off the ground when you let rip you might want to consult a doctor.

That perfect girl is gone

Yeah. Screw you and your normative gender roles.

In the light of day

Let the storm rage on

The cold never bothered me anyway!

Because remember folks... everyone farts once in a while. A true friend would let a small one out to show solidarity.